Easy Mac made even easier

Getting your mac and cheese fix even quicker 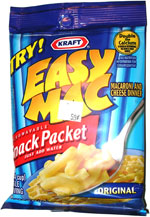 Kraft's Easy Mac microwaveable macaroni and cheese has been around long enough that entire generation of kids has probably never learned how to make the regular version. (It was pretty easy: Boil water, add macaroni, cook a while, drain, then add the powdered cheese packet, milk and butter. Stir until ready.) Easy Mac eliminated a lot of these steps, mainly the butter and milk part, plus you get to microwave the water and macaroni.

But the whole process could still be made easier, which is why Kraft introduced the single-serving Snack Packet of EasyMac. I recently found one of these at a convenience store for 59 cents. The package eliminates the need to buy an entire box of serving-size packs, so you can get to your macaroni and cheese even quicker.

The taste was actually not bad — not as good as the old-fashioned variety, but good in a pinch. Because you only need to add water, it's good to have in the cupboard in case you've run out of milk and/or butter (or margarine if you're one of "those" people).

And yes, I realize that by using the phrase old-fashioned, I may get comments from people who argue that baked macaroni and cheese is more old-fashioned than the "blue box" instant version. But most of those people probably don't read snack food Interweb sites anyway.

I also realize that there's an even faster way to get macaroni and cheese — go buy a pre-made microwave version like Stouffer's, Lean Cuisine or Weight Watchers Smart Ones. However, those don't have the thin macaroni style that Kraft makes famous. So there.