Inside the Snacker's Studio

Our chiptasters make a return visit to Phantom Gourmet

Taquitos.net's Chief Snacks Officer and Secretary of Snacks recently visited the studios of WBZ (CBS 4) in Boston to tape the "Snack Attack" episode of Phantom Gourmet, which will air Jan. 21, 2007, at 10:30 a.m. on Boston's Channel 38, repeated on Super Bowl Sunday at 11 a.m.

We have previously appeared on a sandwich-themed episode, a barbecue episode and two Snack Attack episodes, so this will astoundingly be our fifth appearance on Phantom Gourmet (and that doesn't even count reruns). If it were Saturday Night Live, we would now have access to the special lounge reserved for five-timers.

We won't give away too many of Phantom's inner snacking secrets before the show airs, but you might read something into the number of pizzas scattered around the set in these photos.

If you're the kind of person for whom seven Buffalo wing recommendations just isn't enough, and you insist upon knowning about eight great places to eat Buffalo wings, you won't want to miss this show.

We're proud to say that host Dan Andelman let it slip that our cable show, The Snacking Hour, is no longer just a cable show, but an award-winning cable show. Thanks Dan! 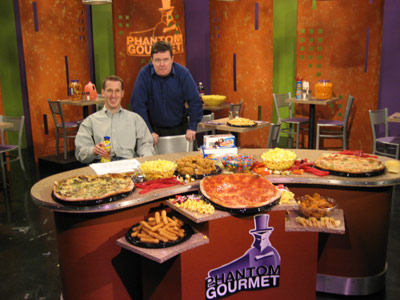 Jeremy and Keith posed with pizza before taping began.
(photos by Amy) 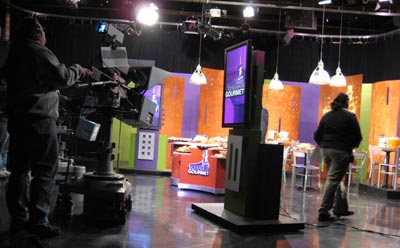 This was the view from the back of the studio as we waited through the first few segments. You can't see it, but there was a table behind us with even more pizza on it. 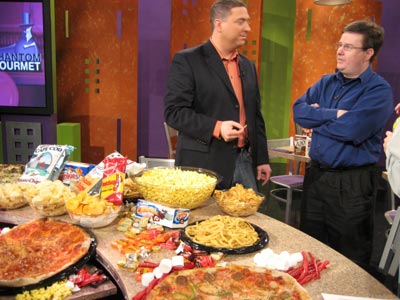 Host Dan Andelman and Secretary of Snacks Keith Shaw chatted just before taping our segment. (If you look carefully, you can spot a box of Caramel Ho-Hos between the bowl of onion rings and the bag of ketchup chips.) 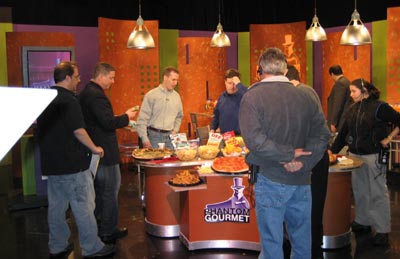 The Phantom cast and crew prepared the set for our segment. Nobody goes hungry on this set!