KFC's Famous Bowls take a good idea and ruin it 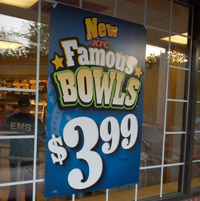 After a production meeting for our TV show, The Snacking Hour, the staff of Taquitos.net convened at the nearby KFC/Taco Bell restaurant, and I was confronted with several promotional posters for Famous Bowls, a new concoction consisting of mashed potatoes, corn, crispy chicken and cheese in a bowl.

The deliciousness depicted in the posters was hard to resist. So I ordered one.

Something seemed strange when, upon completing the order, the cashier reached down, grabbed something and then handed me the Famous Bowl. (The usual procedure for hot food at KFC/Taco Bell is that you get a receipt with a number and wait around for them to make the food.) Suspicious of the goings-on, I immediately asked "Is this hot?" to make sure that I hadn't unintentionally ordered an item whose recipe is supposed to feature cold chicken (as some salads do). He assured me it was hot.

The Famous Bowl was indeed hot, but KFC had managed to screw it up anyway.

There's a basic law of science that KFC does not seem to understand: If you mix crispy chicken with mashed potatoes, corn and cheese, and then let it sit around in some heater until somebody actually orders it, the crispy chicken is gonna get soggy.

So the Famous Bowl was edible, but its claim to fame would be how soggy it was. If they had tossed the chicken, mashed potatoes, corn and cheese into the bowl after I ordered it, the result might have been quite different.