Phoenix rises from the ashes of Krispy Kreme

Kelly's Roast Beef steps up to fill a void

First, we watched them demolish the old Bickford's as we chronicled the quest to build a Krispy Kreme store there.

After many months of waiting, we attended the store's opening day in June 2003, of course, followed by eating many free samples on many return vists (plus an occasional purchase of doughnuts).

Next, we cried as this Krispy Kreme store closed just two and half years later in December 2005.

Since December, we've been mostly bored by the vacant Krispy Kreme building.

Now, we're psyched to see that they're turning the store into a Kelly's Roast Beef! Signs in the windows say it will be opening late this summer.

Kelly's is most famous for the original location on Revere Beach — not to be confused with this Revere Beach Parkway address (and by the way, you don't pronounce the second R). They've also got restaurants at the Jordan's Furniture in Natick, plus Danvers and Saugus. And they're as famous for their seafood as they are for their roast beef. I don't think they have doughnuts at all.

The building permit says it's a "non-structural remodel." A peek through the windows revealed quite a bit of work being done inside, as the old counter was already gone, what looked like booths were being constructed, and the big window in front of the doughnut machine had been removed. 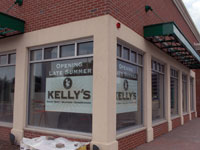 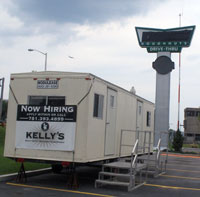 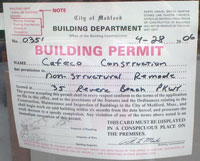