The Joy of the Crunchwrap Supreme

Geometry and tacos together at last 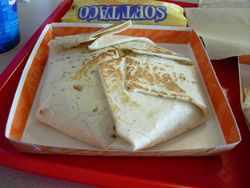 Only 569 calories of taco and cheese goodness wrapped up in a hexagon.

I used to think that Taco Bell tries too hard to find new ways to present new variations of either the taco or the burrito. I mean, really, do people need to eat a Gordita?

But with last year's Crunchwrap Supreme, they hit a home run by taking a basic Taco Supreme (taco meat, lettuce, tomato, sour cream), replacing the grated cheese with nacho cheese sauce, adding a crunchy taco shell and then wrapping the whole thing up in a flour tortilla. But the flour wrapper isn't just a pretty covering — it's actually folded into a nice hexagon and then "grilled" so that the shape holds its form.

I had two experiences with the Crunchwrap Supreme when it first came out — one good and one bad. The bad experience happened when the people at the Taco Bell overgrilled the flour tortilla and it gave a burnt taste to the whole thing. (Advice: If the tortilla looks burned, ask for one that isn't grilled as much.)

But then Taco Bell stopped selling the Crunchwrap, causing us great grief for a few months. Luckily, the item is back at Taco Bell restaurants (as well as the KFC/Taco Bell, our favorite fast-food marriage of companies). But we don't know for how long, so if you've got a Jones for one, better head out now.

So why do I love the Crunchwrap Supreme? Generally, I've always enjoyed the regular Taco Supreme, as it's basically a taco with the addition of sour cream. With the Crunchwrap, replacing the regular grated cheese with a nacho cheese sauce was brilliant — more cheese equals more enjoyment in my book.

Secondly, holding the Crunchwrap Supreme in your hands is pretty easy to do, you basically start at the top and work your way down. This also holds has more structural integrity than a regular taco — I've yet to figure out a way to eat a taco from the side without having the filling spill out onto my plate. It's easier to keep all the meaty and cheesy goodness inside the protective tortilla wrapper without having everything end up on your tray.

Now, Taco Bell suggests in its advertising that the hexagon-shaped Crunchwrap Supreme is "Good to Go," which means you can take it on the run with you (and eat it in the car). I'd warn against that — the Crunchwrap is really too big to hold in one hand without risk of the filling spilling out. Take my advice — eat with two hands, and slowly work your way from the top downward.

One last bit of wisdom: Don't make the rookie mistake of ordering something else too, unless you're really, really hungry. The first few times, I ordered the additional items of nachos or an extra taco to go with the Crunchwrap Supreme. I was full before I got to the halfway point of the hexagon. If you finish the 569-calorie Crunchwrap Supreme and are still hungry, then go up and order the other food items. It would be tragic to have to throw out any leftover Crunchwrap Supremes.

Bonus item: If you love the Crunchwrap Supreme as much as I do, you'll want to show the world your love by creating your own T-Shirt. The Taco Bell Interweb site has a design that lets you create such an item.