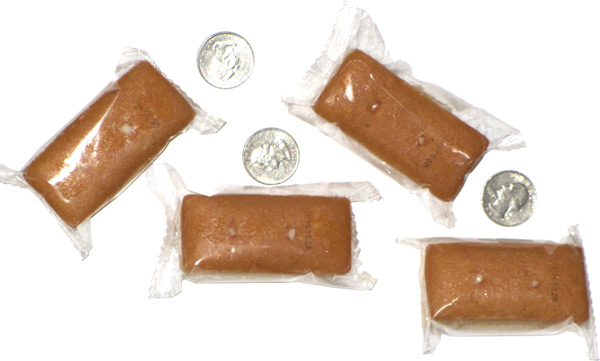 Taste test: We've recently tried a number of knockoff Twinkies, and they were all pretty much the same, which is to say, about as good as Twinkies. (Some examples: Little Debbie, Mrs. Freshley's, R.D. Oskins, Market Basket.) That trend ended right here. I decided to give this one a try because Twinkies are often portrayed as the poster child for bad eating habits, so I was curious to see how a Twinkie could meet Weight Watchers' standards.

From the picture on the box, these looked to be shaped a little different than Twinkies, with more of a squarish appearance, but they did appear to have the standard yellow exterior and white filling. I opened the box and had my "Eureka!" moment as I discovered that these things were tiny, really tiny! I'd guess less than half the size of Twinkies. I'd say the picture was deceptive, because I was not expecting them to be anywhere near that small, but it did at least show some raspberries next to the cakes to give a sense of scale. I put quarters in the picture above for the same purpose.

Anyway, to the cakes. They were individually wrapped and really looked ridiculously small. I bit in to find that the yellow cake itself tasted different than Twinkies, and the filling was minimal, with more of a custard feel than the creme found in Twinkies. It didn't taste that bad, but it was not good either, and it definitely didn't taste nearly as good as Twinkies. As such, I see no reason at all to buy these again. If they're going to shrink the Twinkies and brand it as Weight Watchers, at least make it taste the same or close, to make this about portion control. Without providing the Twinkies taste, what's the point? They're not going to fool anybody. The major success here on the Weight Watchers front was that it was easy to stop eating after one, because they were just not good enough to want to eat two.