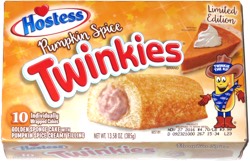 Taste test: Even after eating many other pumpkin spice snacks in recent weeks, I was surprised and thrilled when I spotted this one at my favorite grocery store. There's just something special about Twinkies. 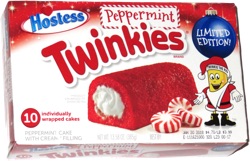 When I opened the box and pulled out my first individually wrapped Twinkie, I was surprised again to find that it looked like an ordinary Twinkie, with the same yellow cake and (it appeared) even the same white filling spilling out of three holes in the bottom. But when I unwrapped it and bit in, I found that the filling wasn't quite white — there was a slight pink tint to it, but far less pinkness than it showed in the picture on the box. The filling wasn't strongly pumpkin spiced; instead, it tasted like a mix of regular Twinkies filling and pumpkin spice. Nothing extraordinary, but a solid effort by Twinkies. Pretty good.