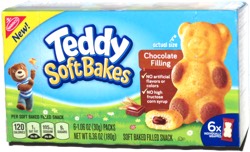 Taste test: This snack was a brand extension of the venerable Teddy Grahams, but aside from the Teddy part, it really was a different thing entirely. The box contained six individually wrapped, Teddy bear-shaped cakes, with the promise of a chocolate filling.

The cake was generally yellowish, with more of a golden yellow surface, almost the color of cornbread, except for the paws, which were brown. There were two separate chocolate creme cavities, one toward the upper body and one on the lower end, and the pudding-like filling went well with the soft cake. Very good with milk!

From the package: “Made in Mexico”

This snack was discovered at Market Basket. Review published February 2017.