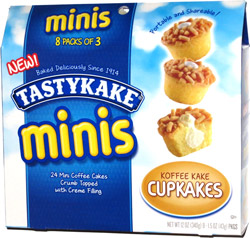 Taste test: Much like the other two Tastykake Minis varieties, Swirly Cupkakes and Peanut Butter, this box contained eight three-packs of small, round cakes. While the other two were fairly similar, these took a different approach, with yellow cake that had a Twinkies-like white cream creme filling and sort of nuggets of cinnamon sugar on top, with some of the filling showing through the top.

One thing that did make these similar to the other two was that these were also much thinner than it showed in the picture on the box. Besides that, the overall appearance, particularly on top of each cake, didn't look much like the ones pictured, as there were way fewer of the cinnamon things, and the whole look was just messier. Despite that, the small cakes tasted really good, as each was just a bit more than bite-size and was great on its own or with milk (or, I supposed you could try coffee, though I did not). The mix of cake, creme and cinnamon sugar worked well, and the feel was spongy soft. It was tough to stop eating these!

This snack was contributed to Taquitos.net by the manufacturer. Review published September 2015.