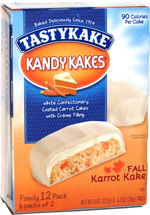 Taste test: These Kandykakes followed the same formula as other flavors, with two small, round cakes per packet, six packets in the box and everything coated in white on the outside.

Most of the other Kandykakes had a flavor stripe inside that contrasted with the bright white coating, but in this case the stripe was just slightly off-white (not a brighter white as shown in the picture on the box). The cake part didn't look that much like the picture either, as it was all sort of a dark yellow color, not the lighter color with chunks of orange shown.

The taste was pretty good, with a fairly typical carrot cake taste, and not an overly sweet one, even with all that frosting.