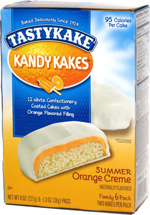 Taste test: It seems that new Tastykake varieties come in pairs lately, as we've now seem multiple instances of a cake and a donut with similar flavors. In this case, they made an Orange Mini Donut to go along with this orange cake (or "kake" as they say in Tastykake's language).

In terms of structure and external appearance, they were just like the Lemon Kandy Kakes, as each packet contained two round(ish) cakes, coated in white frosting, with a flavor stripe raising the white exterior over most of the top. There were six of these packages in the box.

The illustration on the box depicted a Creamsicle next to half an orange, and when I bit in, the taste was much more like the Creamsicle than the orange. The interior looked much like the one depicted on the box, with a bright orange filling above the cake. The cake a had a nice soft feel, with lots of creamy, orange-like taste, sweet but not too sweet. Pretty good.