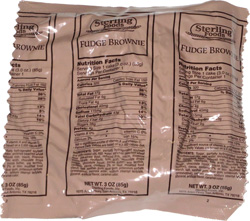 Taste test: From the looks of this vacuum-sealed package (part of a military Meal, Ready-to-Eat), we weren't very optimistic about how the brownie inside was going to look. It looked certain that the very tight, rigid wrapper had both squished and smushed whatever had begun as a brownie into something that we were afraid to look at. But after considerable effort to peel the package open, we were quite surprised to find that it contained a largely intact brick of brownie-like cake.

The shape of the brownie was the best news here, because the taste and texture were nothing to write home about. Generally, packaged brownies fail because they don't come close to duplicating the texture of a home-cooked brownie, with their dense, moist ultra-soft interior and slightly crisp crust. But they are at least moist, usually. This one didn't duplicate the texture either, but it was also dry and fairly bland. It was mildly chocolatey and a had a uniformly dry feel. It was OK for a minor chocolate hit (and even better with some cold milk, not included in the MRE) but definitely on the low end of the scale as packaged brownies go.

This snack was discovered by Blake. Review published .