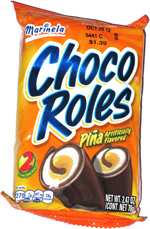 Taste test: These chocolate-covered snack cake rolls promised to be a bit different from the usual devil's-food-and-creme snacks like Yodels, as they were supposed to be a have an additional pineapple flavor.

I opened the package to find two rolls, each a little bit longer than a Yodel. They were different from the ones pictured on wrapper in multiple ways. First, they were more oval, sort of flattened, rather than round. Second, and most importantly, the pictured showed some yellow filling in addition to the white, but in the actual cakes, I didn't see any yellow. I couldn't taste much in the way of pineapple either, but there was maybe a little, as something altered the usual taste. Still, I liked these and ate both rolls very quickly.

Smell test: Definitely can smell some pineapple along with the chocolate.

From the package: “Artificially Flavored” ... “Product of Mexico”

This snack was discovered by Jeremy in East Boston. Review published December 2012.