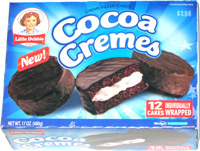 Taste test: This snack was Little Debbie's version of Ring Dings (or Ding Dongs), the hockey puck-shaped Devil's Food snack cake, with a creme center, milk chocolate exterior, and chocolate cake in between.

Unlike Ring Dings' double packs, these were individually wrapped in cellophane. The first thing I noticed when I opened the wrapper was that the chocolate exterior seemed meltier than Ring Dings. I bit in to find that the cakes were moist and had some creme inside, as expected. There seemed to be less creme than Ring Dings, and definitely less than the picture on the box showed, but still, it's a combination that's hard to resist, so these were pretty good.

This snack was discovered by Jeremy at Market Basket. Review published March 2012.