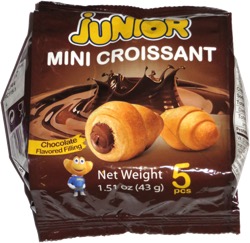 Taste test: When I saw this bag in the snack aisle of an international food store, I was quite surprised, as shelf-stable packaged croissants just aren't very common, particularly ones that were imported all the way from Saudi Arabia.

Indeed, I had no expectation that the contents would actually be soft like croissants, maybe just imitating the shape. So I was quite surprised when I opened the bag to find five (very) mini croissants that were actually soft and crumbly. They didn't have quite the texture of a freshly baked croissant, but they were basically just what was described. The chocolate filling was less generous than shown in the picture on the package, but still enough to give a minor chocolate jolt. Good.

From the package: “Made in Saudi Arabia” ... “Free of hydrogenated oils” ... “Free of artificial flavoring” ... “Contains: wheat, milk, eggs, sheanut”