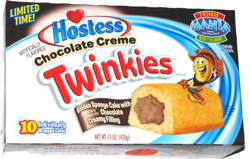 Taste test: This version of Twinkies looked generally the same as regular Twinkies, except that the holes in the bottom had light brown creme instead of the usual white creme (and some of these Twinkies had small brown spots on top as well as some of the creme apparently leeched through the golden cake).

The taste was pretty good, as there was some of the usual Twinkies goodness along with a mild hit of chocolate. I'm a chocoholic who also happens to love Twinkies, and these were not in any way bad, but I would still say that the original Twinkies formula is better than this special version.

Smell test: Nice chocolate smell with a bit of Twinkieness too. I like it.

This snack was discovered by Jeremy at Market Basket. Review published April 2011.