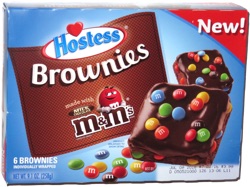 Taste test: This box contained six brownies, each individually wrapped in a typical Hostess white wrapper with red logo. When I opened my first one, I was quite surprised to see mini M&M's rather than full-size ones — the pictures on the box really had me expecting that. There appeared to be a chocolate frosting on the top.

I poured myself a glass of cold milk and bit in to a brownie to find a very soft feel and lots of chocolate from the brownie itself and from the many M&M's on top and inside. (That's right, not only did these brownies get topped with mini M&M's, they also had some within the "brownie" proper.) The taste was reasonably like a good brownie, but as with most packaged "brownie" snacks, they didn't come close to the texture of a fresh-made brownie. Still, pretty good, especially when I alternated bites with sips of milk.

From the package: “6 brownies individually wrapped” ... “When your favorite candy meets a decadent Hostess Brownie!”

This snack was discovered by Jeremy at Market Basket. Review published August 2016.