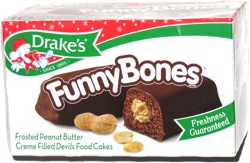 Taste test: These snacks were shaped kind of like Twinkies, but they were smaller, had chocolate cake instead of yellow cake, had peanut butter creme filling instead of white filling and were coated in milk chocolate. They came two to a pack, with five packs in the box. 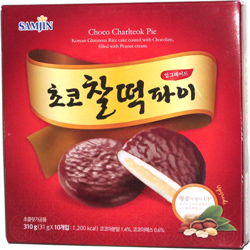 I bit in to find that this was one of the richest snack cakes ever. There didn't appear to be an overwhelming amount of PB creme filling, but it sure tasted like there was. The combination was moist and loaded with peanut butter and chocolate flavor. It's a rarity that half of a twin-pack of snack cakes has me fully satisfied, but in this case, I really was, and I very much I enjoyed my initial Funny Bone with some cold milk. (Of course, I then ate the other one anyway.)

My only regret here is that I waited so many years to review these!