Taste test: This package contained a plastic tray holding three stacks of four smallish stroopwaffles, with a golden beige color on the gridded surfaces and a caramel layer sandwiches in between the two waffles. 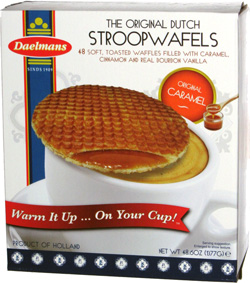 I bit in to find that it was chewy but in a much thicker way than other stroopwaffles, so it took a bit of getting used to but ultimately the deliciousness of the stroopwaffles won out. Pretty good.

From the package: “12 mini waffles”

This snack was discovered by Jeremy at Bazaar on Cambridge Street. Review published January 2021.