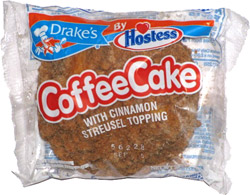 Taste test: This is one of those snacks that I used to eat all the time as a kid but hadn't eaten in years. It was actually a bit different, as it used to be a Drake's product (not "Drake's by Hostess") and it was a two-pack of Coffee Cake Jr. rather than one larger Coffee Cake.

The reason it's definitely worth a review here is that the secret of the Coffee Cake Jr. was that it was pretty good right out of the package, but phenomenal thrown in the microwave briefly to melt the cinnamon sugar. So the hope was to duplicate that deliciousness here.

I did some experimenting with the multi-pack of these and found that 20 seconds in the microwave and a few minutes of cooling-down time worked really well. I think it worked even better with the thinner Jr. versions, but no complaints here. Even better with some cold chocolate milk!

From the package: “With cinnamon streusel topping”