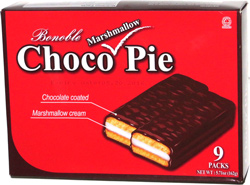 Taste test: This box of chocolate pies from Vietnam deviated from the pattern set by all previous chocolate pies that we've reviewed (and all pies, period, for that matter) in one major way: The pies were not round! Instead, they were bar-shaped. Each of the nine pies was separately wrapped in foil and measured a bit over three and a half inches long, a bit over an inch and half wide and about half an inch thick at the thickest point (right in the center). The wrappers also had lots of air in them.

I peeled one open and bit in to find a very soft, fairly dense, cake-like feel. There were two cake layers surrounding a central marshmallow layer, with a chocolate coating over the whole exterior. The cake parts were a lighter shade of yellow in the actual pies than in the ones pictured on the packaging. There was a nice mix of cake, marshmallow and chocolate. Very good with cold milk!