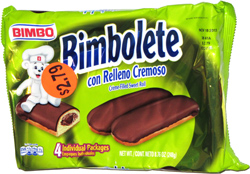 They were pretty darn big, at over six inches long, with a cake-like bottom and a chocolate coating over the whole top. I managed to open the end of one wrapper and squeeze the other end to push the pastry out, and it slid out cleanly without the chocolate sticking to the wrapper — and without having to touch it directly and risk getting my fingers sticky. (It turned out that the chocolate was barely sticky anyway.) The feel was sort of a cross between cake and bread. It felt like a danish or sweet bread, and it tasted a lot like those too. The cross-sections visible after biting in revealed that there were some disconnected small pockets of chocolate filling inside too. The feel and taste were quite nice, and it went quite splendidly with some cold milk. Great!