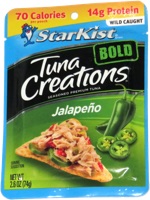 Taste test: This flavor of the tuna-in-a-packet concept promised some jalapeño heat, and when I opened the pouch, I could see some green and red pepper bits within the generally pink-colored tuna.

This kind didn't include a spoon, but that's how I ate it anyway, right out of the packet. Scooping it out of the packet was a bit awkward, even with my solid metal spoon. The tuna had a very moist feel and a zesty tuna taste initially, getting a bit more peppery after that, though pretty mild as hot peppers go — there was substantially less heat than either Bumble Bee's Spicy Thai Tuna or StarKist's own Tapatio Tuna.

Smell test: Some of the peppers' zestiness was noticeable within the tuna.

From the package: “Seasoned premium tuna” ... “70 Calories per pouch” ... “14g Protein” ... “Are you ready for a fiesta of flavor? We kick things off with our premium wild caught tuna and let it mingle with bell peppers and a burst of picante jalapeño peppers. Whether you're enjoying the bold flavors in a wrap, on a plate of tortilla chips or straight from the pouch, you can just tear, eat and go!™” ... “Product may contain bones” ... “Product of Ecuador”