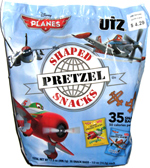 Taste test: This large bag contained 35 small bags of airplane-shaped pretzels based roughly on the Disney movie Planes. I say "roughly" because from what I've seen in the ads, trailers and on these bags, all of the airplanes in the movie have eyes and mouths (much like the cars in "Cars" and "Cars 2") but the pretzels were much cruder and lacked any such details.

When I started grabbing small bags from the big bag, it appeared that there were all sorts of bag designs based on different airplanes in the movie — the first two were labeled as "Dusty Crophopper No. 7" and "El Chupacabra No. 5" (which just happened to be the two kinds of little bags pictured on the big bag). But as I rifled through the bag to find one of each kind, it turned out that there were only those two kinds. This seemed a little weird, given that they were numbered 5 and 7. Inside the bags, there was a similar situation: Just two shapes of pretzels, one that looked sort of like the Wright brothers' plane and one that was sort of like a fighter jet. The bags were small, but they did contain quite a few airplanes in each one.

As for the pretzels themselves, they tasted pretty much like most pretzels, with an average crunch and middling level of salt. Would be nice if one of the airlines started serving these!

From the package: “Not for resale”

This snack was discovered by Jeremy at Christmas Tree Shops. Review published August 2013.