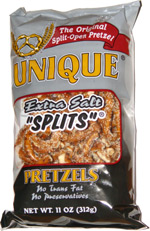 Taste test: These large knotted pretzels fell between the standard pretzels and the huge thick sourdough ones in terms of thickness, and they lived up to their salty name, both visibly and in taste. Most of the salt was on the top side.

My first impressions upon biting in were: Serious crunch and serious salt. In terms of texture, the name was also for real: They were unique — the crunch was just different, as it was a strong crunch but the pretzels also had some lightness to them. As far as the "split" part goes, I looked and actually didn't even notice it at first. A close look revealed that the outer shell of the pretzel was split open in many places along the top edge. The exposed interior had browned as well, so the split part didn't really stand out, but I think that's what delivered the nice texture.

I was very impressed by the saltiness. It was salty to start, and the aftertaste was quite salty as well. I didn't have a beverage handy when I crunched in, but you probably should.

From the package: “Our bakery has been in our family for six generations, starting back in the late 1800's. We've been producing a tasty, crunchy split-open pretzel called 'Splits', the only one of their kind. They're not just another pretzel shaped cracker, 'Splits' pack a serious crunch.” ... “Very salty” ... “Salt lover's dream” ... “Bubbles: Bursting with tantalizing flavor” ... “Beneath The Surface: Hollow pockets create a crispy, flavorful bite” ... “Deep Grooves: Packing a serious pretzel crunch” ... “More Flavor ~ Fewer Ingredients ~ Smarter Baking”