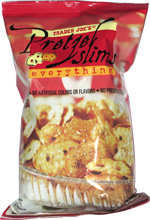 Taste test: These pretzels were a lot like the Pretzel Crisps made by The Snack Factory ones, with a flattened, knotted shape.

For an "everything" flavor, I was surprised by the relatively small amount of stuff on the surfaces. There were poppy seeds, sesame seeds, grains of salt and more, but just not that much of any of them. The crunch was nice, and the taste was good, but it would have been better with more of everything. In particular, more salt would have been quite nice, as the salt crystals were quite sparse. I could taste the individual salt crystals when I encountered them, but that was just not often enough. Still, these were pretty good.

From the package: “Not content with mere salt atop your pretzels? Everything Pretzel Slims are for you. Sesame seeds, poppy seeds, garlic, caraway seeds and, of course, salt, give these crispy teats an edge.”

This snack was discovered by Jeremy at Trader Joe's. Review published February 2013.