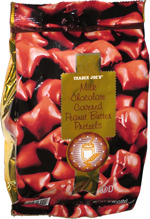 Taste test: Having quite enjoyed the peanut butter-filled pretzel nuggets sold by Trader Joe's, I was pretty thrilled when I spotted this milk chocolate-covered version. Sounded like the perfect combination — what could possibly go wrong?

I opened the fairly large bag (which, unlike the non-chocolate-covered versions, wasn't transparent) to find that it was filled less than 1/3 of the way with nuggets. The nuggets were also bigger than I expected. I figured they would be a bit larger than the regular nuggets because of the chocolate coating, but they were actually quite a bit larger. Each one was square-ish and pillow-shaped, measuring an inch in each dimension on average. The coating had a much darker shade of brown than the nuggets pictured over the whole exterior of the bag. The actual nuggets also weren't smooth and shiny like the ones pictured.

This snack was discovered by Jeremy at Trader Joe's. Review published July 2015.