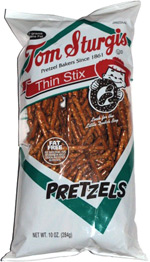 Taste test: Despite their "Thin Stix" name, these 3-inch-long pretzel sticks were just a bit thicker than your typical pretzel sticks, and that was one of the several factors that made these quite good.

The thicker stick gave them a very nice crunch, and the glossy exterior included lots of salt crystals for a really nice taste. The weird (but also great) thing was that a sizeable minority of the pretzels had a different shape than the rest, as one end of the stick was curved so that it looked kind of like a walking stick. When I first saw a piece like this, I figured it was a one-in-a-million fluke (and so I considered putting it up on ebay) but it turned out there were quite a few other pieces with nearly the exact same twist at one end. Great!

From the package: “These pretzels were baked with quality ingredients by our bakers who follow standards set by Julius Sturgis, who founded the first commercial pretzel bakery in America in 1861.”