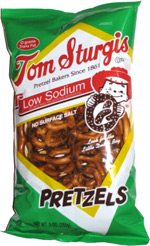 Taste test: These knotted pretzels were fairly thick, though not as thick as some other pretzels, and they had no salt whatsoever on their surfaces.

They presumably weren't entirely lacking in salt (the bag promised "no surface salt" so there must have been some salt within the dough) but we sure couldn't taste much of it. Our tasters were offered these as they had some beers after a road race, and the lack of salt really didn't help, so there weren't any major thumbs-ups for these. When you buy low-salt potato chips, it's easy enough to sprinkle some salt on them to make up for the deficiency, but with pretzels, it's very tough to get salt to stick to the surface.

From the package: “Look for the Little Dutch Boy” ... “No surface salt”

This snack was discovered by Jeremy at Ocean State Job Lot. Review published May 2011.