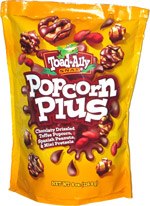 Taste test: This snack mix consisted of individual pretzels partly coated in chocolate; popcorn kernels coated with butter toffee and then sprinkled with chocolate, mostly in single pieces, but with some clusters of two kernels stuck together; and independent peanuts, not coated in chocolate or stuck to anything.

The peanuts were quite rare, as there far outnumbered by the pretzels and popcorn, and they were exclusively at the bottom of the bag. All of it tasted quite good. The toffee popcorn was crisp and sweet, made extra sweet by the chocolate. The pretzels had lots of chocolate for a nice mix of sweet and salty. The occasional peanut added some good taste, but they were hard to find and probably would have been put to better use if they had been attached to the pretzels and popcorn. Still, when we put this bag in the hands of our snackers, they ate it up by the handful with no complaints. The mystery here was the difference between Popcorn Plus and Triple Play, which is put out by the same company and contains basically the exact same elements. This one calls it "toffee" rather than "butter toffee" on the bag and says "chocolaty drizzled" instead of "chocolate drizzled" so it could be that this is just a cheaper version.