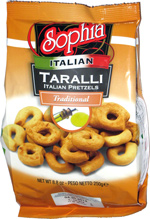 Taste test: These round-ish snacks had a light beige color, much lighter than your typical pretzels, and the exterior was not shiny at all.

I say "roundish" because few of them were all that close to being circular. They appeared to be hand-made by curving a stick of dough and folding the ends over each other, as the overlapping ends could easily be seen, unlike most machine-made pretzel rings. They were about as dense as pretzels, with a soft crunch, but the taste was much more bread-like. They were decent and worked as an acceptable accompaniment to some beer, but they nothing special.

From the package: “Often called 'Italian Pretzels', taralli savory snacks are enjoyed all over Italy. These crunchy, irresistible rings are boiled and then baked, giving them a smooth shiny texture. Sophia Taralli snacks are the perfect accompaniment to wine, beer or your favorite beverage. Buon Appetito!” ... “Product of Italy”