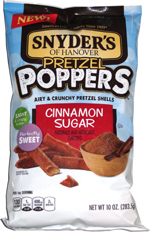 Taste test: The description of these on the bag as hollow "pretzel shells" brought to mind Unique Pretzel Shells, and they were quite similar to those. One thing these offered that those didn't was cinnamon sugar flavoring; as unusual as flavored pretzels are, sweetly flavored ones are even rarer.

We opened the bag to find that the Poppers were shaped kind of like elongated pretzel nuggets, about 2 inches in length. They had kind of a pretzel-like color, but not a pretzel-like shine, as the surfaces had a matte finish with lots of white, sugary-looking stuff on it. (This was different from what was pictured on the bag, which looked liked it was packed densely with dark cinnamon sugar.)

We crunched in to find a light crunch and a mildly cinnamony, mildly sweet flavor initially. The flavor transitioned into more of a salty pretzel flavor as the sugar wore off. Lots of snacks have more cinnamon sugar loaded onto them, but these still tasted good. The interiors were indeed hollow, with bright white surfaces inside.

From the package: “Airy & crunchy pretzel shells” ... “Perfectly Sweet” ... “Light & Crispy Texture” ... “By pairing cinnamon and sugar with the best part of the pretzel — the crunchy outer shell — you experience a snack so light in texture and full in flavor you'll be carried away!”

This snack was discovered at Stop & Shop. Review published February 2015.