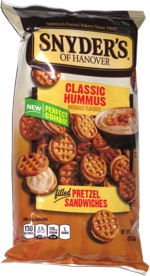 Taste test: Snyder's of Hanover has been filling their round pretzel sandwiches with all sorts of things lately, but the whole idea of this one threw us for a loop. We've got nothing against hummus, and putting it in between pretzels sounded good, but how exactly do you take something that's perishable like hummus and put it into a shelf-stable bag of pretzels?

We looked over the bag for some answer to that question, but found nothing that even attempted to address it. Barring any progress, it seemed like eating time! I opened the bag to find the same general format as Snyder's other pretzel sandwiches, with two round grid pretzels with nice shiny, brown surfaces and a thin filling in between. The hummus has the typical hummus color, with some of it spilling out a bit through the holes. The first bite tasted like way more pretzel than hummus, and after that there was a strong taste of nicely tangy hummus. This hummus filling brought a whole lot more hummus taste than the various "hummus chips" we've tried that didn't really taste much like hummus at all. Really good!

From the package: “Enjoy the creaminess of Perfectly Blended Classic Hummus sandwiches between two crunchy, bite-sized Pretzel Snaps! They're a prefect combination!”