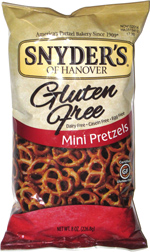 Taste test: These small knotted pretzels were made from corn, potato and tapioca rather than the conventional wheat, and when we opened the bag, they sure looked like ordinary pretzels.

The surfaces had a typical pretzel color, with occasional bits of salt. Then we crunched in and found that the similarities ended right there. The crunch was much different from the feel of a wheat pretzel, with a much different type of snappiness. It was different enough that the texture didn't bring pretzels to mind at all. There was an intense, brittle crunch upon bring in, then no crunch at all after that, versus the much more consistent crunch through the process of eating a wheat pretzel. Some of the corn-based gluten free pretzels that we've tried had a changed texture but retained a pretzel flavor, but these did not. The taste wasn't bad, but it was odd to be holding something that looked like a pretzel but neither tasted not felt like one. One other oddity was that the whole bag, despite being nearly full upon arrival, felt quite light, as the density was apparently much lower than an equivalent volume of wheat pretzels.

Smell test: Definitely different from regular pretzels. Smells like some sort of baked good, but I can't figure out which.

From the package: “Dairy Free • Casein Free • Egg Free” ... “Certified GF Gluten-Free®” ... “Snyder's of Hanover is proud to offer Gluten-Free snacks to the millions of people living with celiac disease or following a Gluten-Free lifestyle.”

This snack was discovered by Jeremy at Market Basket. Review published June 2014.