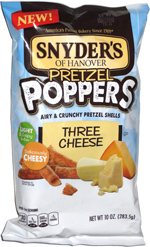 Taste test: These hollow pretzels looked much like the cinnamon sugar version, kind of like nuggets but elongated, with the only difference being the cheese coating. When we crunched in, there was a light crunch that came with a good pretzel flavor and also some cheese.

The idea of the hollow pretzel was to deliver the tasty outside while avoiding the bland interior, and they did deliver on a nice strong pretzel taste. We could certainly taste the cheese (a true cheese connoisseur could probably identify the three kinds by taste) but the cheese coating was quite mild as cheese snacks go, much like the cinnamon ones didn't overwhelm us with cinnamon. If you like the taste of pretzels and would rather have just a little cheese, that's a good thing. But if you intended to make up for this by dipping them in cheese sauce, this kind may not be such good idea, because the thin shells would probably break. Still, the mix of pretzel and a little cheese was a pretty good taste.

This snack was discovered by Jeremy at Stop & Shop. Review published March 2015.