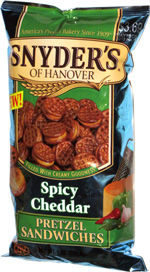 Taste test: The sandwiches in this bag consisted of of light orange-colored cheddar filling in between two round grid pretzels. When I opened it the bag, I found it was filled only halfway. I checked the Nutrition Facts to find that it was supposed to contained 72 sandwiches (9 servings times 8 sandwiches) so I did a full count and found 69 sandwiches, just a bit short of the promised number. When I poured them out onto a plate to do the count, I found that all of the sandwiches were intact and complete, with no stray pieces or broken pretzels, so the quality was very good.

From the package: “Filled With Creamy Goodness” ... “America's Pretzel Bakery Since 1909™” ... “Imagine real, creamy cheddar cheese seasoned with jalapeño sandwiched between two bite-size Pretzels Snaps. They're a delicious snack at home or on-the-go.”