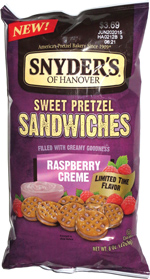 Taste test: These pretzel sandwiches used the same round grid pretzels as Snyder's of Hanover's other pretzel sandwiches (such as the peanut butter and cheddar ones) but promised a much different experience, thanks to the sweet raspberry creme filling.

I opened the bag to find that the pretzels looked pretty much the same as those others, but the filling had a light lavender color, much like the bowl of creme pictured on the bag and the sandwiches shown next to it. I crunched in to find quite a strong and sweet raspberry taste.

When I shared these around, they surprised me by being one of the more divisive snacks among our tasters. I figured most people would hate them, and some indeed did. But when I shared these in between songs with members of a band playing at a bar (it's something I do), the band members just about went crazy, eating them by the handful and nearly flipping out with praise.

From the package: “Limited time flavor”

This snack was discovered by Jeremy at Star Market (formerly Shaws, and Star Market again before that), Porter Square, Cambridge, Massachusetts. Review published May 2015.