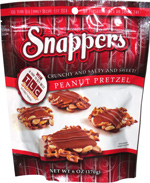 Taste test: We were thrilled with the Snappers pretzel-and-chocolate clusters when we found their original version in a huge, expensive bag at Costco, then equally thrilled when two years later they finally added a second version, Peanut Butter Pretzel, but it still was a huge Costco bag.

So the big deal with this one was spotting it in a small bag (along with similar sized bags of Dark Chocolate Sea Salt Caramel flavor and the two already reviewed versions), somewhere other than Costco! No more need to trek to Costco for our fix of Snappers, just at the fabulous local supermarket. (Why's it fabulous? Try Googling "Market Basket Arthur T" or just look at the list of snacks we bought there.)

The formula here was a lot like the other kinds, with several small grid pretzels stuck together by caramel into clusters, with peanuts stuck to the caramel and then coated and drizzled with chocolate. They came in all sorts of shapes and didn't look as nice as the ones pictured on the package, and some were stuck together, but wow, they were good! There was some crunch from the pretzels, but the overall feel was chewy because of all the delicious caramel. There was sweet, there was salty, there was lot of chocolate, and it was pretty awesome. They couldn't fit nearly as many clusters into this small bag as they did in the big ones, so we couldn't share these with as many hungry snackers, but everyone who did get to try a cluster was quite thrilled.

From the package: “Crunchy and salty and sweet!”

This snack was discovered by Jeremy at Market Basket. Review published September 2015.