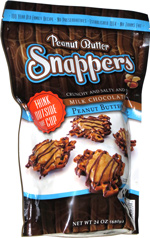 Taste test: After being simply overwhelmed by the awesomeness of the original Snappers clusters (combining chocolate, pretzels and caramel), the only negative thing that we could think of was the fact that The Milk Shake Factory was a one-trick pony, with not a single other snack for us to try.

Two years later, they've apparently learned a second trick! This kind followed a similar formula to the first, with lots of milk chocolate on one side, topped by broken-up grid pretzels, covered with peanut butter (instead of the caramel in the original) and then drizzled with more chocolate.

I opened the zip-top bag to find that the clusters came in all sort of shapes and sizes, thanks largely to the randomness of the broken-up pretzel grids. The clusters didn't look quite as shiny-nice as the ones pictured one the bag, but they did look good, with a nice contrast between the colors of the milk chocolate, PB creme and pretzels. I grabbed a piece to find that both the top and bottom chocolate layers were quite melty on the fingertips. But everything after that was smooth sailing — I crunched in to find an abundance of rich chocolate and rich peanut butter, with a nice light crunch from the pretzels, and the pretzel layer even had plenty of salt to contrast to the various sweet layers. Great!

From the package: “Crunchy and salty sweet!” ... “Milk Chocolate Peanut Butter Pretzel” ... “100 Year Old Family Recipe” ... “Snappers are inspired by our childhood. Growing up, we watched our parents make our favorite chocolate confections, Turtles, at the family chocolate factory. Those memories inspired a new, innovative twist on a classic treat — the perfect blend of creamy peanut butter, rich milk chocolate and the salty crunch of pretzels.” ... “Think outside the cup”

This snack was discovered by Jeremy at Costco. Review published July 2015.