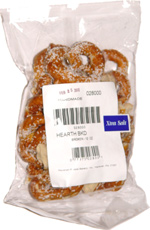 Taste test: These thick pretzels had more salt than any of the 4300+ snacks we've previously tried.

That's not a complaint — it's actually why I picked this particular bag. The bag had a mix of unbroken pretzels and various sized pieces, with a golden brown color on the exterior portion (lightened considerably by all of the salt). There was a big crunch upon biting in, solid enough to require some effort but not so hard to break any teeth, and once the initial bite was made, the feel was crisp and not too dense. Our salt-loving snackers were impressed by the level of salt as they consumed these pretzels with beer, but there were a few complaints that it was just too much salt. One taster said it was like drinking seawater. Very good pretzels, but not for the faint of heart!