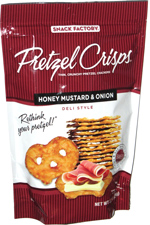 Taste test: This version of the flattened Pretzel Crisps looked much like the other kinds of Pretzel Crisps, with some light seasoning on the surfaces of the knotted shapes. The surprise here was that unlike most of the other Pretzel Crisps varieties, which boasted fairly original flavors, the promised flavor was quite familiar from the pre-Pretzel Crisps world of pretzels, having been done before by Bachman, Snyder's of Hanover, Rold Gold (twice!), Utz (again, twice!), and Cumby's.

We crunched in to find a crispy crunch and the usual Pretzel Crisps texture, but there was a fairly weak flavor. It had just the slightest hint of mustard, maybe some onion and a hint of sweetness, mixed in among some other seasonings, without enough of any of the three principal flavors to stand out. Tasty and good, but as honey, mustard and onion pretzels go, disappointing. Where's that mustard kick?

Smell test: Not much. Certainly not honey, mustard and onion.

From the package: “Thin, crunchy pretzel crackers” ... “Deli Style” ... “Rethink your pretzel!®” .... Back of the bag includes a recipe for a Croque Monsieur.