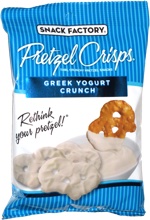 Taste test: These flattened, knotted pretzels had a fairly thick off-white coating that promised not just yogurt — something we've seen on pretzels before — but Greek yogurt, which we haven't.

I've personally never tried Greek yogurt (I've heard the hype, though), but to me the taste seemed pretty much like regular yogurt, with lots of sugar. I offered them to some folks who do enjoy eating Greek yogurt, and although everyone was impressed by the taste, they all agreed that it did not taste like Greek yogurt at all. The bag had two separate lists of ingredients, one for the coating and one of the pretzel, and Sugar was listed first on the former and second on the latter.

Smell test: Smells like regular yogurt (with lots of sweetness), not Greek.

From the package: “We've dipped our thin and irresistibly crunchy Pretzel Crisps® in tangy smooth Greek Yogurt to create a perfect blend of savory and sweet. Try them frozen, or top them with your favorite ice cream for an extra special treat.”