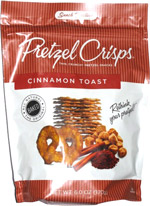 Taste test: These flattened knotted pretzels had lots of cinnamon sugar visible on their golden-colored surfaces.

I crunched right on in to find that the first taste was a nice sweet cinnamon toast flavor, but that taste didn't last long, as more of a conventional, slightly sweet pretzel taste took over right after that. Most cinnamon toast snacks taste just like cinnamon toast, but this one definitely didn't, and it was about an even mix of cinnamon toast and pretzel The texture felt great, as there was lots of crunch but still a light feel because there wasn't all that much substance. Our tasters loved this flavor.

From the package: “Rethink your pretzel!” ... “Thin, crunchy pretzel snacks” ... “Cinnamon? On a pretzel? Really? One bite and you'll see why Cinnamon Toast Pretzel Crisps are the tastiest odd couple around. Sprinkled with just the right amount of imported cinnamon and cane sugar, Cinnamon Toast Pretzel Crisps are equally sweet and savory. They're the best part of the pretzel – all the flavor and crunch you love – but lighter, crispier and baked to perfection.”

This snack was contributed to Taquitos.net by the manufacturer. Review published February 2011.