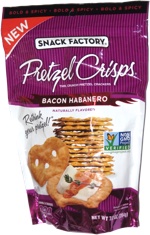 Taste test: This new flavor the the flattened Pretzel Crisps had the usual shapes and colors, with a fairly lightly seasoning on the surface that didn't add much color to the surfaces.

We crunched in to find a very zesty flavor that had a strong hint of bacon initially, with some mild heat building up in the aftertaste. The taste was more smoky than really bacony (and that was confirmed by the ingredients, which listed no meat of any kind, but did include "Smoke Flavor") and the heat wasn't super-intense, but this was still probably the hottest version of Pretzel Crisps that we've had so far.

Smell test: Some sort of seasoning, similar to other Pretzel Crisps flavors, but neither bacon nor habanero.

From the package: “Crunch'em. Crack'em. Dip'em. Stack'em.™” ... The “10 Second Appetizer” recipe on the bag suggests putting Brie, Fig Preserves and Thyme atop one of these Pretzel Crisps.

This snack was discovered by Jeremy at Wegmans. Review published .