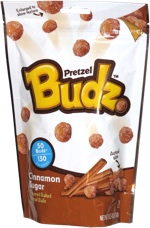 Taste test: Much like the cheddar version of Budz, this bag contained small pretzel balls, half an inch in diameter, with a light brown color and some flavoring powder on the outside. And also much like the cheddar ones, they weren't good. In fact, this cinnamon flavor was even worse than the cheddar.

There was a good crunch but a bad taste. The hint of cinnamon sugar was the highlight of the taste, but whatever else was in there was just plain bad. Just terrible.

Smell test: Some cinnamon, but mixed in with a bad smell, not like regular pretzels. Ick.

From the package: “Our seasoned Pretzel Budz™ are literally rollin' in flavor™ to give you bold, baked-in taste with a satisfying crunch in every bite. They're great for family snacking on their own or as a delicious addition to your favorite sweet or savory meals.”