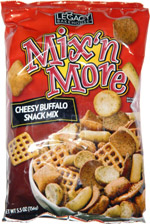 Taste test: This was a top-notch snack mix, as it tasted great and contained several elements not usually found in snack mixes, and even the ones similar to the usual elements were far better than usual.

Lets start with the two kinds of bread chips. The thinly cut rye bread chips were very tasty and were cited by most of our tasters as the standout. The smaller but thicker bagel chips had a milder crunch but had lots of tasty seasoning on them. The bread stick bites had a nice soft crunch and a light feel, with a good bready aftertaste. The grid-shape pretzles were excellent as well. Far from being the bready element that brings down the mix, these pretzels had a great crunch and were loaded with tasty seasoning. The "cheddar puffs" were the oddball pieces. They weren't cheese puffs, but smallish, dense things that were remotely cheesy, not a bad taste. The seasoning was tasty and tangy, and it adhered to the different mix elements to different degrees, but it didn't remind me much of Buffalo wing sauce. Still, a great mix of nice tastes and a variety of crisp textures.

From the package: “Get your taste buds ready for a real party with Mix'n More™ Snack Mix. Who's on the guest list? Fresh Vienna Rye, Bagel Chips, Cheddar Puffs, Bread Stick Bites and Crisp Waffle Pretzels. They're all dressed up in a lip-smackin' blend of seasonings and baked to perfection.”

This snack was contributed to Taquitos.net by the manufacturer. Review published August 2009.