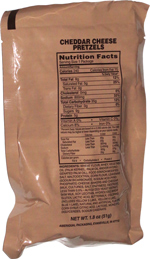 Taste test: When we saw this bland package with the words "Cheddar Cheese Pretzels," visions of knot-shaped pretzels with cheese seasoning came to mind. We've reviewed more than 400 pretzels, but precious few of them have met that description — just this one from Rold Gold and this "Special" edition from Utz, neither seen in stores in recent years. (Why the bland package? It was part of an MRE. What's an MRE? Glad you asked!)

Alas, we opened the package to find something else entirely: tubes made of pretzel material filled with bright orange-colored cheese. Or, as they're better known, Combos. Not only did they look just like Combos, but we crunched in to find that they felt and tasted the same too — a crumbly pretzel feel, with a mildly tangy cheese filling, about an even mix of pretzel and cheese taste. There were a dozen pieces in the bag, but it was big enough to fit many more. (In the manufacturer's defense, this snack was one of many packages inside the MRE, and there was likely a constraint on the total volume of the combined MRE.)

A comparison of the ingredients with the officially branded cheddar pretzel flavor of Combos revealed a perfect match, so we're figuring these were indeed made on the same production line as Combos and just packaged quite differently for their role inside an MRE.

This snack was discovered by Blake. Review published July 2015.