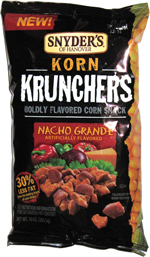 Taste test: When I first saw this bag, with contents that looked to be similar to Snyder's of Hanover's popular broken-up thick pretzels, with the word "corn" (and "korn") mentioned several times on the bag, it appeared to be a pretzel-style snack for intended for people who have problems with wheat. It didn't seem so crazy to assume that a bag that said "boldly flavored corn snack" and "30% less fat (than the leading brand of corn chips)" — with no mention of the word "wheat" on the front of the bag — was a going to be be gluten free. But I checked the back of the bag just for the heck of it, and my assumption couldn't have been more wrong. Not only did the Allergen Information section say it did contain wheat, but the very first ingredient was Enriched Flour (containing Wheat Flour). I showed the front of the bag to some wheat-sensitive eaters, and they also assumed this was mostly-corn snack, but they didn't jump to the conclusion that it would be wheat-free. Still, this wheat/corn confusion was a weird way to position Korn Krunchers.

Opening the bag, we found that the pieces really did look just like broken-up pretzels, with light brown pretzel exteriors including some darker areas and a dark mustard yellow seasoning adhering to the exposed interiors. We crunched in to find a solid feel similar to hard pretzels, but there was also some crumbliness as corn products tend to have. The taste was really good — they didn't hold back on the Grande in this Nacho Grande flavor, so it was quite spicy and really tasty. Way hotter than any other "nacho" flavored snacks we've tried. The spices and heat were quite nice, and they went well with the cheese and wheat/corn base snack.

The Korn Krunchers clearly failed our expectation of being a wheat-free snack, but they did nicely introduce some corn texture into what was already a very popular snack category among our snackers.

Smell test: Good spicy cheese smell. Intense, but not too cheesy, more emphasis on the spices.

From the package: “30% less fat (than the leading brand of corn chips)” ... “boldly flavored corn snack” ... “When the mood hits you, nothing will satisfy you crunchy mouthful of bold flavor!” ... “Crunchy nuggets of baked corn that deliver a bold kick of flavor in every bite! With sharp cheddar cheese, sweet tomatoes, the spicy hit of jalapeño peppers and special seasonings, Nacho Grande Korn Krunchers™ will cure what you're craving!”