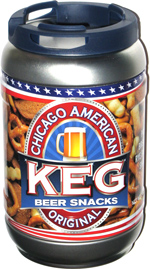 Taste test: This snack mix came in a container that was supposed to look like a keg of beer.

The lightweight aluminum can didn't really feel much like an actual keg or even a miniaturized one, and the snacks weren't directly in the keg, but rather in a foil bag inside the fake keg. So it didn't project all that much keg-iness. The foil bag contained three kinds of small pretzels (knotted, rings and sticks), two kinds of bread sticks (wiggly ones and sort of bread loaf-looking ones) and a rye bread melba toast. The textures varied a lot from one type to the next — the melba toast was very crunchy, the bread sticks were crisp and lightly crunchy, and the pretzels crunchy but not that crisp — and the combination of textures worked well. There seemed to be some Worcestershire-type seasoning on everything, but it was most noticeable on the melba toast. Overall, the taste was kind of like the original Chex Mix, but without the Chex. Pretty good.

Smell test: Kind of like the Worcestershire smell of Chex Mix.

This snack was discovered by Jeremy at Christmas Tree Shops. Review published March 2014.