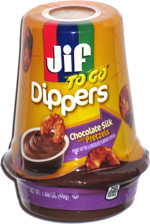 Taste test: This single-serving package contained a small cup of roundish, Pretzel Crisps-style flattened pretzels, plus a tub of peanut butter and chocolate dipping sauce. The package design was a lot like YoCrunch, with its large yogurt container and small container inside the cover containing the various things to mix into the yogurt. The difference was that the liquid/solid roles were reversed here — the pretzels were in the large cup and the dipping sauce in the small one — and the positions were inverted, with the dipping sauce at the bottom, probably to allow gravity keep the dip off of the foil cover.

It was a good idea, but there were a couple of problems. The first disappointment was that pretzel cup was only filled halfway, and the second was that about half of those pretzels were broken. Other than that, everything was good here. The pretzels were crunchy and tasty, with plenty of salt. The dipping sauce was extremely soft and smooth, and it was loaded with great peanut butter and chocolate taste.

Smell test: None from the pretzels; very nice mix of chocolate and peanut butter from the dip.

From the package: “Peanut butter and chocolate flavored spread” ... “Contains no preservatives” ... “No refrigeration needed”

This snack was discovered by Jeremy at Target. Review published August 2014.